No other Italian holiday lasts as long as Ferragosto, which technically is celebrated on Aug. 15 but can last a week or two – or even the entire month of August – for some citizens.

The holiday originated with the first Roman emperor Augustus in the year 18 BC, who ordered a day of rest on the first day of August following weeks of hard work harvesting the fields. The holiday was known as Feriae Augusti, which is now more commonly known as Ferragosto.

The holiday was eventually moved to Aug. 15, the Feast of the Assumption of Mary, which is also a Holy Day of Obligation in the Catholic church.

In the 1920s, the fascist regime organized “holiday trains” to cities and resorts, offering discount prices for one to three days of rest. Food and board were not included, so Italians packed their own feasts.

Today, August 15th in Italy has many traditional celebrations. Some are religious processions honoring the Virgin Mary’s ascension into heaven. Others are festive and fun, ranging from fireworks, water balloons, horse races, bonfires, beach games and more. In Rome, the Gran Ballo di Ferragosto is a city-wide party. Many streets and squares feature different types of dance festivals.

After the 15th, offices, factories, many stores and restaurants – especially mom-and-pop establishments – often shut down for a week or two, and some require all employees to use their vacation days during that time. The fact that August is the hottest month in Italy also inspires families and friends to plan group vacations and head to cooler seaside, lake, mountain or pastoral communities for vacation.

The foods of Ferragosto 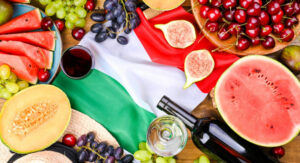 Because so many crops are harvested in late summer, Ferragosto festivities often feature large gatherings of family and friends around the dining table.

Foods served to celebrate Ferragosto are typically light, such as cold pastas and fresh vegetables and fruits, especially juicy watermelon sold at roadside stands. But Italians enjoy feasting on good food no matter what the weather, so there are some traditional dishes associated with Ferragosto, such as ripe tomatoes stuffed with seasoned rice.

In Tuscany, popular holiday dishes are roast squab and panzanella, a “bread salad” made with day-old bread, ripe tomatoes, onions, basil and a light vinaigrette. In Rome, the traditional holiday dish is slow-cooked chicken with sweet peppers. In Puglia, galluccio is a grass-fed cockerel that is stuffed and baked, a specialty once relished by less affluent families who could afford to eat meat only on holidays.

Traveling in Italy during Ferragosto

Foreign visitors who arrive in Italian cities may find a quieter-than-normal atmosphere, because so many locals are vacationing. Almost everything is closed on Aug. 15, and many shops and restaurants are closed for a week or two near that date.

But tourists may benefit from smaller crowds in museums and cultural centers that remain open, including the Colosseum, Pantheon or Galleria Borghese in Rome. 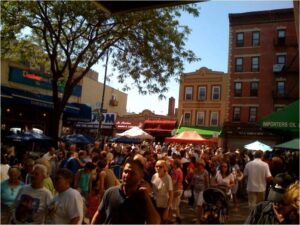 In New York, an annual Ferragosto festival is celebrated on Arthur Avenue in the Bronx on a Sunday in early September. About 30,000 people attended the event in 2019, enjoying musical and theatrical entertainment, and foods including pizza, pasta, mozzarella, cannoli and more. This neighborhood in the Bronx is often called the “Real” Little Italy because of its abundance of Italian shops, many owned and operated by the same families for almost a century.