The Easter Pies of Italy

The Easter Pies of Italy

Many traditional foods of Easter are famously rich, a gustatory celebration after 40 days of Lenten fasting. Some of the most decadent specialties are Easter pies, both sweet and savory, and feature eggs and grains, which represent new life and harvest.

Easter pies are most commonly eaten for Easter brunch or as an appetizer or dessert. They are a labor of love that involves making a homemade crust, cooking or layering the filling, topping it with lattice strips of dough, baking, cooling, then carefully cutting into slices. Nowadays, many Italian specialty grocers will make and sell the pies whole or in smaller sections, as a time saver for busy households.

Pizza rustica is essentially a rich stuffed deep dish pizza (or sometimes compared to a quiche) that is usually served at room temperature. It has many different names, depending on regional dialects, including pizza chiena, pizzachino, pizza gain or pizzagaina, pizza ripiena and even Italian Meat Pie in the United States.

The traditional pie is made with a lard-based dough. The filling consists of layers that alternate between home-cured meats such as prosciutto, mortadella, capocollo, soppressata and sausage, and Italian cheeses such as ricotta or basket cheese. Other pizza rustica recipes incorporate all the meats, cut into small cubes, into a rich quiche-like filling. Some regional versions also have cooked greens or sliced eggs.

Recipes for pizza rustica have been found dating back to the 17th century. When immigrants from southern Italy came to the United States, their pies included what they could find, such as ham and pepperoni. 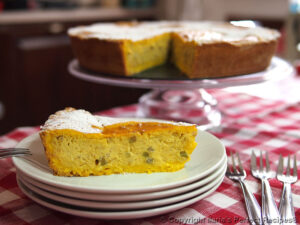 Pastiera is a sweet lattice-topped pie that originated in southern Italy, with many regional variations. The most famous is pastiera napoletana, made from ricotta or farmer’s cheese (also known as basket cheese), cooked wheat berries, sugar, milk, and bits of candied orange and citron, all baked in a shortbread pie crust.

There are many theories about the origins of pastiera; the first recorded recipe dates back to the 1600s. The current recipe closely resembles a confection made by nuns in Naples for Neapolitan noble families. One legend tells the tale of sailors who were lost at sea during a storm and survived on a simple form of the wheat pie.

Today, many cooks buy jars of pre-cooked grano cotto to avoid the time-consuming process of cooking the wheat berries. One variation, a pastier e’ ferellini, is made with dried angel hair pasta. Pastiera di riso is made with Arborio rice. Another variation even uses pastina instead of wheat. 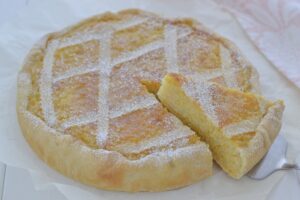 One Easter pie originates from Liguria in northwest Italy. Torta pasqualina is made with puff pastry and spring greens such as spinach or chard, and eggs baked inside. When sliced, it presents beautifully. Devout families will make their torta with 33 sheets of puff pastry, representing Jesus’ age when he died on the cross. 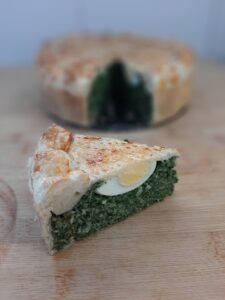 By Joyce Venezia Suss|April 6th, 2022|Food, History, Holidays, Traditions|Comments Off on The Easter Pies of Italy