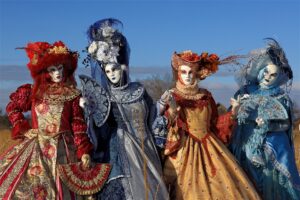 Around the world just before Lent, many Carnevale celebrations feature incredible parties, outlandish and dazzling costumes where less is more, and a giddy sense of debauchery. But in Italy, Carnevale traditions are often culturally and historically based, some dating back to medieval and Renaissance times. Costumes reveal less flesh, but the celebrations are hardly sedate, with large parades, parties, masquerade balls, shows and fairs.

Carnevale in Italy is also a time for practical jokes and pranks, as simple as throwing confetti or as mischievous as throwing eggs. A common expression is “A Carnevale ogi scherzo vale,” or “Anything goes at Carnevale.”

Carnevale literally means “removal of meat” in reference to the fasting that typically takes place during the pious season of Lent. Carnevale often becomes a frenzy of eating meat and rich foods before Lent begins, especially on the Tuesday before Ash Wednesday – Martedi Grasso, or Fat Tuesday.

Many Italian communities have Carnevale celebrations that last several weeks before Lent begins. Here are some of the most famous.

The famous city of canals has been celebrating Carnevale since the 11th century, and the tradition continues each year in an elegant fashion.

Masks – maschere – are sold all year round at shops in Venice, ranging in price from inexpensive plastic to exquisite handcrafted versions that cost hundreds of euros.

There are many events every evening during Carnevale season in Venice, mostly around Piazza San Marco, and partying people freely walk around the city in costumes and masks. Many hotels host balls, and even rent costumes for visitors. 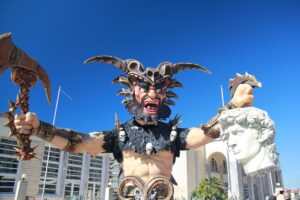 Carnevale in Viareggio is a masterpiece of allegorical fun, with giant floats and papier-mache masks that parody politicians, celebrities and current events.

For five weekends before Lent, this city on the Tuscan coast has a massive parade, concerts, festivals, masked balls, fireworks, and many other cultural events.

It began in 1873 as a small parade of festively decorated carriages, and has grown every year. It is now the largest Italian folk event with an annual budget of 5 million euros. The city’s Carnevale mascot is Burlamacco, a clown-like figure first depicted in 1931. 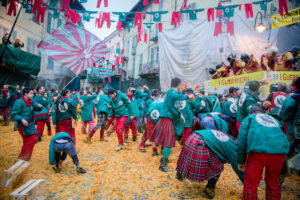 Carnevele celebrations in the small town of Ivrea include masked balls, a large parade, and festivals in which giant copper pots of fagiolate, a hearty bean soup enriched with various sausages and meats, are cooked for six hours and served to the needy.

The highlight event is the Battaglia delle Arance on the Sunday before Ash Wednesday. Thousands of people in costumed teams gather in the streets and throw oranges at each other. The bizarre spectacle recreates (with oranges instead of weapons and stones) a 12th century battle between locals and Royal Napoleonic troops that began after a young peasant girl rebuffed the advances of a tyrannical ruler. An estimated 400 tons of oranges are mashed to a pulp in the streets each year. Afterward, the participants sit down and feast on a traditional meal of codfish and polenta. 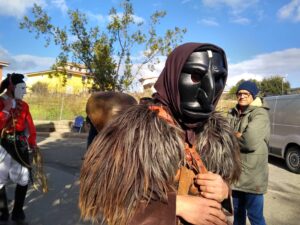 Unlike the colorful spectacles in other Italian communities, Carnevale in the mountainous island of Sardinia is rustic, historical, and typically dark and mysterious.

The traditions are based on ancient farming rituals, with men and animals as the main characters, dressed in sheep fur, with cowbells tied to their back.

Every small town has distinct wooden masks with different meanings, some ghostly, others gloomy or scary – all representing the struggle against Mother Nature. 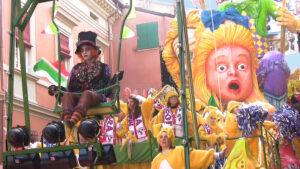 Cento, in the Emilia-Romagna region, is a sister city to Rio de Janeiro, Brazil, known worldwide for its Carnevale celebrations. Because of this connection, Cento Carnevale D’Europa attracts people from across Italy, held on five Sunday afternoons before Lent. Brazilian samba dancers and percussionists participate in Cento’s event as musical performers on the main stage of Piazza Guercino. 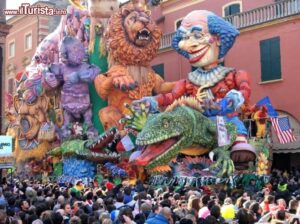 Crowds have been estimated as high as 20,000 people in one day, crowding streets to watch the gigantic floats (some taller than local buildings) and marching bands.

An estimated 30,000 pounds of candy are thrown to spectators each year. After the parade, one float association is selected for the Best Float award, receiving a monetary prize and the chance to travel with the float to a competition in Rio de Janeiro. 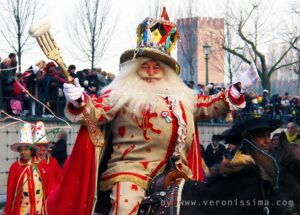 One of the oldest Carnevale celebrations in Italy is held in Verona, dating back to 1531. On Fat Tuesday, Verona has a parade with more than 500 floats, but the most delicious tradition occurs the Friday before: Venerdì Gnoccolaro, or Gnocchi Friday, when almost every restaurant and bar serves the delicious potato-based dumpling.

A local resident is elected as Papa’ de’ Gnocco, or the Father of Gnocchi, a month before Carnevale. All who attend the announcement receive free gnocchi. 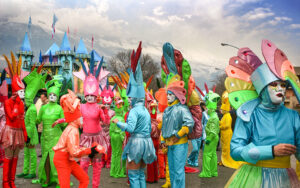 The southern Italian region of Calabria has several notable Carnevale events, with many celebrating the region’s Pollino wine. In Castrovillari, the Carnevale of Pollino features women dressed in intricate local costumes. The annual event, held for more than 60 years, was recognized in 2017 as a historical carnival by The Ministry of Heritage and Cultural Activities. 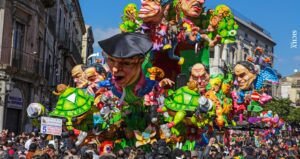 In the Sicilian town of Acireale, close to the volcano Mt. Etna, Carnevale parades feature beautifully artistic flower and papier-maché allegorical floats, similar to those made in the 1600s. The floats are embellished with elaborate lighting systems, which makes the evening parades the most popular.

There are also miniature floats that are actual works of art – small versions of the giant floats.

Participants wear masks that represent the Abbatazzu (clergy) and Baruni (mocking the aristocracy). The Carnevale events also attract folk bands from all over Italy. There are children’s events, a chess tournament, and a finale with fireworks. 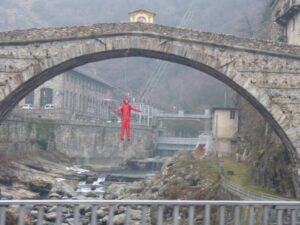 Carnevale in Pont-Saint-Martin is more like a toga party, celebrated in Roman style with processions and parades, dancing, performances, fireworks – and sometimes chariot races. Residents portray a variety of characters in a local legend, in which Saint Martin met the devil in Pont-Saint-Martin during a pilgrimage. The only bridge that crosses a small river was destroyed; Saint Martin made a pact with the Devil to rebuild it, but saved the souls of local residents with a clever twist. On Fat Tuesday, Carnevale ends with the hanging and burning of an effigy of the devil under the bridge.

To learn more, click here for a Casa Belvedere presentation: Trivia Night – A Carnevale Evening in Venice. In this engaging question-and-answer virtual session led by award-winning author and cultural expert Carla Gambescia, discover little-known back stories of the canal city often called La Serenissima; its opulent, often decadent, and captivating history; and the inventiveness of its residents.