Cats in Italy – beloved and protected

Cats in Italy – beloved and protected

Italians love cats so much that there are laws to protect feral cat colonies. Cats can freely roam wherever they want – even in famous historic landmarks. Anyone who harms a cat in Italy can be charged with a crime. Cats can also live wherever they like – and must be fed. They cannot be relocated. Local Italian authorities are responsible for neutering local street cat colonies.

In ancient times, cats were companions to wealthy Romans and served as pest control. Cats were considered sacred by the Goddess Diana, who was believed to give special powers to cats.

Archaeologists did not find many preserved cat remains while excavating the ruins in Pompeii. Some theorize that cats were instinctively aware of danger and quick to leave before Mount Vesuvius erupted and buried the city in 79 CE. However, cats are featured in some restored frescoes in the remains of luxurious Pompeii villas. 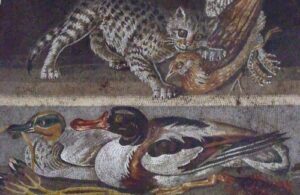 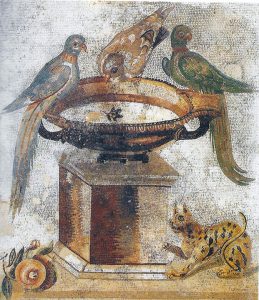 The most famous cat colonies in Italy are in Rome, Sicily and Venice. Throughout Italy, it is estimated that tens of thousands of felines are undomesticated, and many of the lucky ones live in registered and protected cat colonies. Many gatti di Roma live and roam ancient sites such as the Colosseum and the Baths of Caracalla, and famous tourist attractions such as the Spanish Steps. 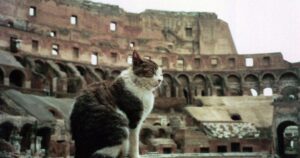 Cats at the Colosseum and the Spanish Steps.

A well-known cat colony lives in Largo di Torre Argentina, a square with four Roman Republican temples and the remains of Pompey’s Theatre. The square is fenced off, but visitors can meet some of the cats at the cat sanctuary’s gift shop. 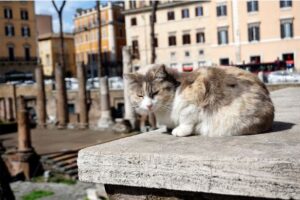 Some gatti di Roma are friendly, some are arrogant, but most are characteristically aloof. Local organizations take care of the cats, often led by a gattara (cat woman) who typically receives help from vets for spaying and neutering. One of the most famous gattare was Italian film star Anna Magnani. If cats are injured or sick, they may be temporarily taken in until they recover, and some elderly and disabled cats may be permanently placed in a protected location for extra care.

In Venice several decades ago, cats were basically everywhere in the famed canal city. They were allowed to roam free to keep mice and rats away. In the 13th century, some cats were bred to be particularly adept hunters. But in the 1960s, many cats were ill, and it was becoming a problem. 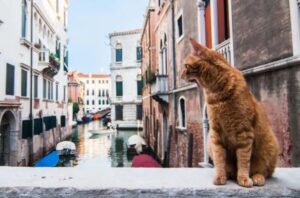 A woman who organized trap-neuter-release programs was initially met with resistance, but it helped eradicate feline disease. Domestic cats are more popular now in Venice, but groups still care for cat colonies, including one at the famous bookstore Acqua Alta. 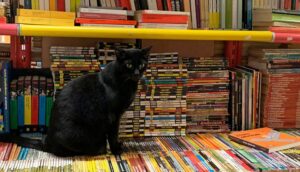 Sicily is believed to have the most feral cats in the country, largely because of the temperate climate in the southern Mediterranean region. 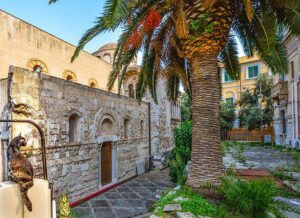 Barivel, a Maine Coon cat living with his Italian family in Vigevano, Pavia, has held a Guinness World Record since 2018 for being the longest cat in the world. The big cat measures 3 feet, 11.2 inches long. When Barivel’s owners, Cinzia Tinnirello and Edgar Scandurra, post photos of their massive cat on social media, some people assume they have Photoshopped the image. But Barivel’s size and length are 100 percent real.

Nerina was a kitten when she joined the cat colony at Rome’s Colosseum, and the historic amphitheatre became her permanent home. But unlike many colony cats that disappear when tourists arrive, the friendly black cat enjoyed following visitors and often posed for photos. Many people mourned when Nerina died in 2021 at age 10 from medical issues.

Toldo shared a special bond with his owner, an elderly man named Iozelli Renzo from Montagnana who rescued Toldo as a kitten and showered the cat with affection. When Renzo died in 2011, Toldo followed the coffin from the house to the cemetery. For years afterward, Toldo visited the grave and left behind small gifts such as sticks, twigs, leaves, paper towels, toothpicks, and plastic cups.

Tommasino, a black stray cat rescued from the streets of Rome by Maria Assunta, became a multi-millionaire when the 94-year-old widow died in 2011. She left her entire estate – estimated at $13 million – to the alley cat via her nurse, who continued to care for Tommasino and work with Assunta’s attorneys to find a worthy animal welfare association.

Perhaps unsurprisingly, cats have been incorporated into a variety of Italian proverbs.

I gatti hanno sette spiriti … Cats have seven spirits. In the United States, cats are said to have nine lives.

Di notte tutti i gatti sono neri … By night, all the cats are black. A suggestive saying about how people all look the same when it’s dark under the covers.

Tanto va la gatta al lardo chi ci lascia lo zampino … So often goes the cat to the lard that she loses her paw. Essentially, what goes around, comes around.

Non c’e’ trippa per gatti … There’s no tripe for the cats. It’s a statement when things are not going your way.

By Joyce Venezia Suss|August 8th, 2022|History, Traditions, Uncategorized|Comments Off on Cats in Italy – beloved and protected