Valentine’s Day is celebrated in many countries around the world, with people showing their love in many ways – typically with gifts of candy, flowers, cards, and romantic dinners. Italy has a special connection to the holiday because its origins began during the Roman Empire, and Feb. 14 is the feast day of San Valentino – Saint Valentine. 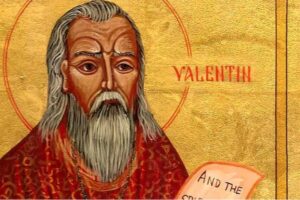 There are several theories about who was actually the holiday’s namesake. Several Christian martyrs who died for love’s sake were named Valentine, but the patron saint is generally acknowledged to be a bishop from Terni, a small town in Umbria. Valentino defied the emperor’s orders by secretly marrying couples, either because of their Christianity or to spare the husbands from war. For these “infractions,” Valentino was martyred on Feb. 14 in the year 269.

In the fifth century, the Pope created a feast day for San Valentino, in an effort to stop the raucous Roman fertility festival of Lupercalia, when young couples participated in sexual game-playing from Feb. 13 to 15. St. Valentine’s fame grew over the years as poets including Chaucer and Shakespeare wrote about this day of love. In the United States, Hallmark transformed the feast day into a full-fledged commercial holiday. And in Italy, La Festa Degli Innamorati is celebrated with some special traditions:

Baci – the Italian word for kisses – are popular Italian chocolates with a hazelnut filling, crowned with a whole hazelnut. The iconic blue foil wrapper also covers a tiny love note with a romantic quote. To celebrate its 100th year, Baci Perugina partnered with Dolce & Gabbana to create a special collection “Love and Passion” Baci. The Valentine’s confection is a soft gianduia heart topped with a hazelnut and enriched with raspberry flavored crystals. 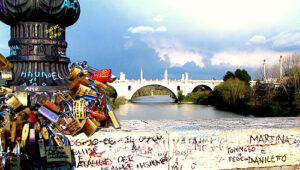 A recent romantic trend is Lucchetti dell’Amore. Italian sweethearts profess true love for each other by locking a padlock in a public place – especially famous bridges in Rome, Florence and Venice – and then throwing the key away, typically into the water under the bridge.

The tradition continues all year and seems charming, but Italian authorities keep trying to stop it. The padlocks obstruct the historical beauty of old bridges, and the added weight of hundreds of abandoned locks threatens the structures’ integrity. It has been a losing battle, and authorities periodically cut off the romantic locks. 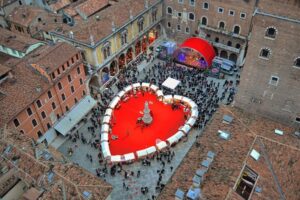 In Verona, Italy – known as the city of Romeo and Juliet – a giant red heart is painted in the middle of historic Piazza dei Signori.

lluminated heart-shape lanterns are also hung around the center of the city. 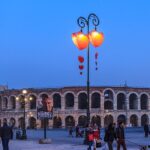 There are free concerts, a contest for the most beautiful letter written to Juliet, and many local hotels and restaurants offer specials to attract couples to visit Verona for the weekend.

The Bishop of Terni 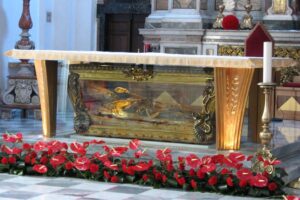 Many Italians believe that San Valentino was the Bishop of Terni, a town in the Lazio region. The beautiful Basilica di San Valentino has the tomb of Saint Valentine under the main altar. Each year on the Sunday before Feb. 14, engaged couples attend a special mass and exchange vows in front of the altar.

In another local legend, the bishop grew roses in his garden and gave them to young people in his congregation. When one couple fell in love, others began to visit the bishop for flowers and his blessings, securing his reputation as a patron of lovers.

Orange is the new red? 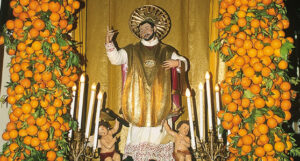 Vico del Gargano residents start Valentine’s Day with a solemn mass, then parade through the village streets carrying a wooden statue of San Valentino decorated with citrus and laurel. Plants and fruits of oranges and lemons are blessed, and people eat the blessed oranges and drink orange juice to ensure joy and happiness. 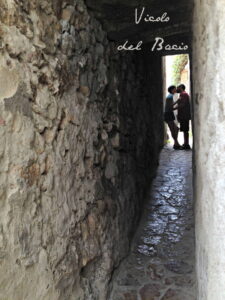 The village is also famous for its Vicolo del bacio, a very narrow alley in the center of the historic district. Traditionally, lovers meet in the alley to exchange promises of love.

According to legend, kissing a loved one in Vicolo del bacio ensures their loyalty for life.