Naples: A not-to-miss city in Italy

Naples: A not-to-miss city in Italy

Tourists who visit Italy typically include Rome, Venice and Florence on their itineraries, but for the complete Italian experience, the trip should absolutely include Naples. The city in southern Italy boasts a wealth of historic castles, catacombs, cathedrals and chapels, amazing art treasures, views of Mount Vesuvius, and the Lungomare promenade with views of the Mediterranean Sea.

Yet even with so many amazing things to see and do, Naples has been called “the stepchild of Italy” because of an incorrect perceived image that the city is a dangerous place for tourists.  “When you say to most people that you are going to Naples, they say, “Oh, don’t go there, it’s dangerous,” said Anita Sanseverino, an award-winning photographer dedicated to the subject of Italy as well as a lecturer and scholar of Italian history and culture. “Aside from the fact that it is not true, the irony of this statement is that none of the people who say this have ever been there!

“When people talk about Italians and their characteristics, they are unknowingly talking specifically about Neapolitans,” she said. “As much as Italians in general are known for their love of food, music, of life in general, these qualities are 10-fold in Neapolitans. They are the quintessential Italians.”

Here are just a few of the must-see sites to visit in Naples:

Duomo di Napoli is the most important church in Naples. Its actual name is The Cathedral of the Assumption of Mary, and is also known as the Cattedrale di San Gennaro, in honor of the city’s patron saint who performed miracles. 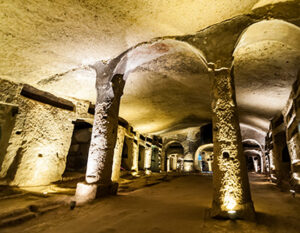 Tours of Napoli Sotterranea (Naples Underground) offer a fascinating history of the underground caverns first created almost 5,000 years ago as burial tombs. The ancient Greeks dug out blocks of volcanic material to build Naples’ walls and temples, and the Romans eventually used the caverns for the city’s underground water supply.

Museo Archeologico Nazionale is an archeological museum with an impressive collection of works from Greek, Roman and Renaissance times, including artifacts from the nearby excavated ruins of Pompeii.

For a modern marvel, the Toledo Metro Station is one of Metro Napoli’s Art Stations. Yes, it’s part of the city’s subway system, but it is an artistic masterpiece not to be missed.

The Church of Gesù Nuovo was originally a palace built in 1470 for a prince. It has an unusual façade, ornate chapels, and a large collection of masterpiece artworks.

Piazza del Plebiscito is a semicircular piazza with the royal palace on one side, the neoclassical church of San Francesco di Paola on the other, and two massive equestrian statues. It is one of the most photographed places in Naples.

Naples has seven castles that were built in ancient times to defend the Gulf of Naples from naval attacks. It was once the only city in the world that boasted seven castles within its boundaries. Today, some of the castles are well preserved, and a few are open to the public as museums and event venues. 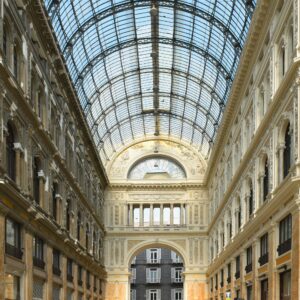 Galleria Umberto is a large cross-shaped public shopping gallery, across from the San Carlo opera house. It boasts a tremendous glass dome, and adjoining wings also have vaulted glass ceilings.

For a fascinating historical look at Naples, click here for a program presented at Casa Belvedere.

By Joyce Venezia Suss|April 26th, 2021|History, Travel|Comments Off on Naples: A not-to-miss city in Italy