Celebrating Naples: A Journey Through History
Presented by Anita Sanseverino

Naples is a city filled with art treasures, churches of magnificent design, palazzi, an ancient centro storico, the magnificent seafront area called Lungomare with its majestic view of Mount Vesuvius, and many other historic and artistic sights.

Naples has been called “the stepchild of Italy” – and Anita Sanseverino is determined to change that undeserved perception.

“When you say to most people that you are going to Naples, they say, “Oh, don’t go there, it’s dangerous,” she said. “Aside from the fact that it is not true, the irony of this statement is that none of the people who say this have ever been there!”

Anita is certain that her fascinating lecture and beautiful photographs will ensure that Naples is on the priority list of people who plan to travel to Italy, just as much as Venice, Florence and Rome.

She will highlight the illustrious history of this once-royal kingdom dating back to its origins as the Greek city of Partenope. She will discuss the various rulers and dynasties that occupied Naples, and why unification might not have been the best thing to happen to this former kingdom.

Anita will share her personal experiences in Naples, especially with its generous citizens. “When people talk about Italians and their characteristics, they are unknowingly talking specifically about Neapolitans,” she said. “As much as Italians in general are known for their love of food, music, of life in general, these qualities are 10-fold in Neapolitans. They are the quintessential Italians.” 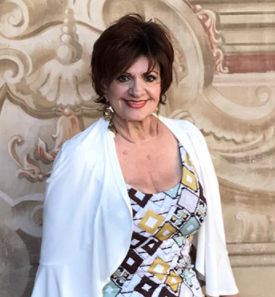 Anita Sanseverino: She is an award-winning photographer dedicated to the subject of Italy as well as a lecturer and scholar of Italian history and culture. Anita Sanseverino is a recipient of the Woman of Achievement in the Arts (NJ) and has exhibited her photographs at the 2009 Tuscia Arts Festival in Viterbo, Italy, the Columbus Citizens Foundation, and Queens College in New York.  She has presented her photographs and lectures about the Presepio Napoletano, Carnevale di Venezia and the region of Puglia at the Italian American Museum, Italian Cultural Foundation at Casa Belvedere, Westchester Italian Cultural Center, the Garibaldi Meucci Museum, Ramapo College, Wagner College, and St. John’s University as well as at various Italian American organizations throughout the tri-state area.