The Italian Presepio: From St. Francis to Casa Belvedere

The Italian Presepio: From St. Francis to Casa Belvedere

The Italian Cultural Foundation at Casa Belvedere annually displays the Solidarity Creche, a gift by the Naples (Italy) Chamber of Commerce to the Fire Department of the City of New York (FDNY) following the 9/11 terrorist attack on the World Trade Center. Il Presepio Della Solidarieta, an exquisite, artisanal exhibit of museum quality that tells a heartfelt story, is protected in a glass case on the front portico for all to see.

In the massive tableau, the Three Kings – instead of bringing gifts of gold, incense and myrrh – present Baby Jesus with three New York City firefighters’ helmets with the numbers 9, 11, and 01. The handcrafted work of art was created by master artisans of the Campania Region of Italy with techniques that date back to the 17th century.

Here are some interesting facts about Italian presepio traditions:

What is a presepio? Many Catholics display a Nativity set during the Christmas season, but Italian Catholics are fond of creating large, elaborate scenes which may include many more figures, lighting, detailed backdrops of villages – even running water. In the Latin version of Saint Luke’s Gospel, Mary laid the baby Jesus ‘in praesepio‘: in a manger.

Setup often starts on Dec. 8 – the Feast of the Immaculate Conception – and Baby Jesus is placed in the manger on Christmas Eve. The Presepio typically remains set up until the Feast of the Epiphany on Jan. 6. The tradition is strongest in Naples, where hundreds are on display throughout the city in scales from tiny to tremendous. Some even have people and live animals. 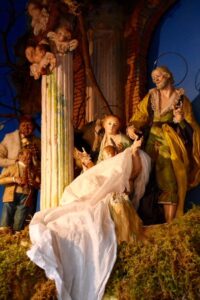 Who is represented in a presepio? The central figures are Baby Jesus in the manger, Mary and Joseph, and perhaps the Three Kings (who are placed into the scene after Christmas). More elaborate presepe include a host of other characters, including angels; shepherds with sheep, cattle and other herd animals; and local citizens including butchers, wine merchants, fishermen, bakers, grocers – often 12 people who sell things to represent the months of the year.

When was the first presepio created? The first presepio was created by St. Francis of Assisi in 1223. He placed a manger and live animals in a cave outside the Italian village of Greccio, so locals could recreate the scene of Jesus’ birth before Christmas mass. Eventually, a sculptor crafted marble figures for Pope Boniface VIII; nobles began displaying presepe; and Nativity scenes became a tradition in many Italian homes on a smaller scale. Presepe in Italy are typically seen in churches, Italian palaces and other public places.

Where is the best place to see and/or buy a presepio? One street in Naples – Via San Gregorio Armeno, more commonly known as Via dei Presepi – is unquestionably the best place to find the largest variety of presepe in the world, and is a popular tourist attraction. Artisans in hundreds of shops sell their handmade figurines and scenic elements not just at Christmas, but all year.

Many presepe figures and scenes are affordable, made of wood or plaster. Others with higher price tags are handcrafted by Italian artisans with intricate details, including clothing made of rich fabrics with gold thread and jeweled details. 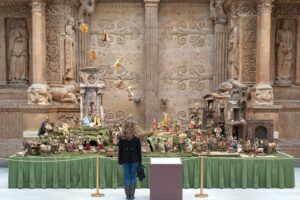 The Presepio at Carnegie Museum of Art in Pittsburgh.

In the United States, besides Casa Belvedere’s presepio, other notable Neapolitan presepe include the massive Neapolitan Baroque Creche at the Metropolitan Museum of Art in New York City; the Pittsburgh Creche in downtown Pittsburgh, Pennsylvania; and a handcrafted presepio in the Carnegie Museum of Art, also in Pittsburgh.

Why do Italians cherish the presepio tradition? Vatican City in Rome is the world headquarters of the Roman Catholic church, with museums and chapels where people can view a vast collection of religious art and architecture. Most Italians are Catholic, and many Italian craftsmen eagerly embrace both religion and art. 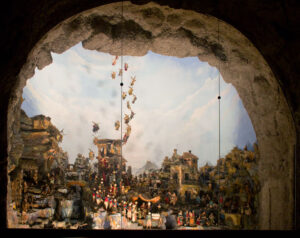 The world’s largest presepe is in Naples, at the Museo Nazionale di San Martino.

The world’s largest presepe is displayed in Naples at the Museo Nazionale di San Martino, a former monestary. The Presepe Cuciniello has more than 170 figures, 80 animals, 28 angels, and over 400 tiny objects. It was created in the 19th century by Neapolitan playwright Michele Cuciniello.

By Joyce Venezia Suss|November 29th, 2021|History, Holidays, Traditions, Travel|Comments Off on The Italian Presepio: From St. Francis to Casa Belvedere