Every country has wedding traditions passed down from generation to generation, and many are internationally popular, such as the couple’s first dance, the bride throwing her bouquet; and tossing rice at newlyweds to symbolize fertility.

The tradition of the June bride dates to ancient Roman times; June is named for the Roman goddess Juno, a protectress of Roman women associated with fertility and feminine vitality. Also, couples getting married in a Catholic church were once required to have their banns – a public declaration of intended marriage – announced three times during Sunday mass. Since weddings were not held during Lent, and May was dedicated to worship the Virgin Mary, June became a popular wedding month.

Italy has many of its own special wedding traditions, especially in southern Italy – and many have continued among Italian-Americans in the United States. 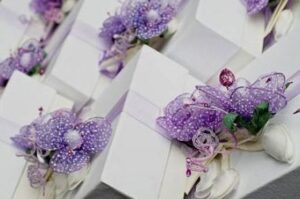 Bomboniere is the Italian word for wedding favors which a newlywed couple will give to their guests. Favors can vary from small to large, and often come with a cluster of confetti (see below) tied with ribbons printed with the names of the bride and groom, and the wedding date.

Confetti are candied almonds – almonds coated in a white sugar candy shell – that are typically given in an odd number (usually five) for good luck and wrapped in tulle.

La borsa is the large satin bag that Italian brides often carry to hold la busta – envelopes with cards and cash gifts for the newlyweds. If the bride is too busy dancing, la borsa is entrusted to her mother or another close adult.

La serenata is an older tradition still followed in some parts of Italy. The groom organizes musicians and friends to gather beneath the bride’s window the night before the wedding, to “wake up the bride” for the big event. The old-world custom is gaining popularity in south Philadelphia, where grooms will often get a street permit for the karaoke-style event. 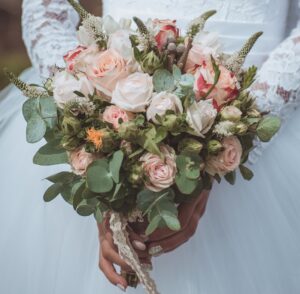 Bouquet da sposa (the bride’s bouquet) is always a gift from the groom. Even if she selects the flowers and design, the groom is expected to pay for it and have it delivered to her before the wedding as a final “dating” gift.

La Tarantella is a popular Italian folk dance at wedding receptions, in which guests hold hands and surround the happy couple, moving clockwise and counterclockwise to the boisterous tune.

Venetian Hour, or “Trionfo di Golosita,” ends the wedding reception with an overflowing table of sweets, cakes, pastries, fruit, liquors, and coffee, and is especially popular among southern Italians. Sometimes the table is so large and lavish that it requires its own room. Ironically, this often follows a multi-course Italian meal that starts with a tremendous assortment of antipasti at the cocktail hour, then two or three pasta dishes and/or a hearty soup, and several entrées and side dishes.