From private home to cultural center: Transforming a 1908 NYC landmark into a public institution

Home/History/From private home to cultural center: Transforming a 1908 NYC landmark into a public institution
Previous Next

From private home to cultural center: Transforming a 1908 NYC landmark into a public institution

The early 19th century was a time when well-heeled socialites flocked to Grymes Hill, a cliffside neighborhood located 374 feet above sea level, the second highest elevation on the eastern seaboard south of Maine. The town was developed by Major George Howard — his namesake is the avenue that runs through the Staten Island neighborhood – who was responsible for building many of its homes.

However, “in the 1830s, the hill began to be developed with estates,” the New York City Landmarks Preservation Commission notes. “The neighborhood took its name from Madame Suzette Grymes, wife of the noted New Orleans lawyer John Randolph Grymes, who began buying property near the present-day intersection of Howard Avenue and Grymes Hill Road in 1836, creating an estate known as Capo di Monte.”

In the early 19th century, other wealthy notables discovered the stunning Grymes Hill waterfront views, and built magnificent country estates on this island hilltop. These included Capt. Jacob Vanderbilt, brother of Commodore Cornelius Vanderbilt. Another Grymes Hill family estate was the 38-acre “Bellevue,” built circa 1851 in the Italianate style for Sir Edward Cunard and his family. The building still stands as Cunard Hall on the campus of Wagner College.

One of the most exquisite Grymes Hill mansions was built in 1908 as the country estate of Louis A. and Laura Stirn. The Stirn Mansion at 79 Howard Avenue was – and still remains – a true architectural gem, with an Italianate-style, neo-Renaissance exterior, and an arts and crafts style interior. The Stirn Mansion is one of the rare surviving examples of early 20th-century country house designs on Staten Island, and is one of the few houses of its size and type in New York City.

The Stirns lived in their home for many years; their heirs sold the home in the 1960s. It had several owners after that, and by the year 2000, there was concern that the mansion would be demolished, and the property would be filled with several large homes. With time, effort and significant donations, the mansion was spared and became home to the Italian Cultural Foundation, renamed Casa Belvedere (house with a beautiful view) to reflect its spectacular views of the Verrazzano Bridge and New York Harbor.

The story begins with a silk merchant and a society wedding.

Louis Stirn was born in 1853 to a prominent Lutheran clergyman. At age 14, he left Germany for New York, where he found work in the silk industry. Stirn became a partner in a firm that acted as a commission merchant for a German manufacturer of velvets and woolens, and he established his own firm in 1894. The firm was an import house dealing in ribbons, silks, velvets and chiffons, distributing to leading retailers like Marshall Field and Co.

Stirn moved to Staten Island in 1882, and married Laura Natalie Methfessel six years later. Laura was the daughter of Professor Anton Gotlieb Methfessel and Laura A. Roebling Methfessel. The professor was considered one of the most prominent educators on the Island and founded the Methfessel School in 1862. The boys boarding and day school would go on to become The Staten Island Academy and Latin School, which to this day is still the Island’s most prestigious private primary and secondary school.

Professor Methfessel’s wife, Laura A. Roebling Methfessel, was the daughter of John Augustus Roebling, the famed bridge builder and manufacturer of wire cable, who planned and oversaw the early construction of the Brooklyn Bridge. Tragically, John Roebling’s foot was crushed in the pilings of a Brooklyn pier when a barge came in to dock. As a result, John contracted tetanus and died less than a month later. His son, Washington, succeeded him as chief engineer, only to later become incapacitated by “the bends,” a kind of decompression sickness caused by changing air pressure, not uncommon on bridge-building sites. Though “the bends” left Washington partially paralyzed and very ill, he continued “working” on the construction of the Bridge via his wife Emily.

Emily was not an engineer, but she would visit the work site nearly every day, relaying detailed drawings and orders from her husband.  Keep in mind, Emily was dealing with mostly construction men of over a century ago. It was a time when men, construction or otherwise, were not accepting of women’s orders in the least! Were it not for Emily’s strong character and perseverance, her father-in-law’s vision and her husband’s designs would not have been executed.

It was thanks to these three individuals — John A. Roebling, Washington Roebling and Emily Warren Roebling — that the largest suspension bridge in the world, at the time it was built, was completed in 1883. In fact, Emily’s enormous role in this colossal task was recognized on March 28, 2018 in The New York Times “Overlooked” section, a series of obituaries dedicated to pioneer women whose accomplishments had been previously overlooked.

How fascinating that The Stirn Mansion has strong ties to one of the most prominent and renowned private schools on Staten Island, and strong ties to the first bridge to span the East River, spanning 3,461 feet and rising 133 feet above the river below. This was a significant milestone in the history of American engineering. 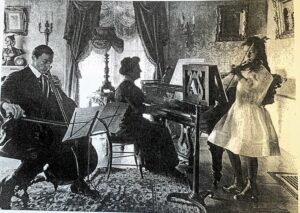 The large house at 79 Howard Ave. provided accommodations for Louis and Laura Stirn and their five children; Laura Stirn’s widowed sister Emily Wicchers, and her son Manolo; two maids and a cook. 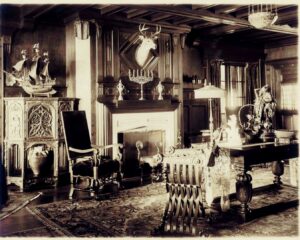 According to Laura Patrick, the Stirns’ granddaughter, “There was a great hall, living room, music room, conservatory, dining room, kitchen, pantry, and powder room on the first floor; six bedrooms, a sitting room, and two bathrooms on the second floor; and two large bedrooms, and three maid’s rooms, on the third floor.” 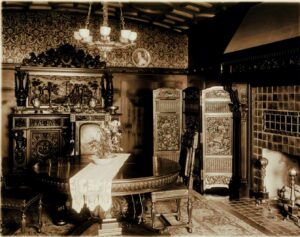 The Stirns continued to occupy their “charming residence … known for its splendidly appointed gardens and beautiful view of the surrounding country and adjacent waters” until their deaths. Laura Stirn died in 1943, Louis Stirn in 1962.  Following Louis Stirn’s death, the house was sold to Reuben Gross, a prominent attorney and leader in the Jewish community, and his wife, Blanche Gross.

In the 1990s, the Gross family leased the mansion to Wagner College President Norman Smith. For many years, President Smith was allowed to live in the palatial home and entertained frequently in grand style. After Dr. Smith’s relocation to England, the house and its grounds began to degenerate and fall apart, as the heirs of the Gross family’s estate were in litigation for 11 years.

In 2000, there was concern among neighbors and preservationists that the mansion was to be sold and demolished to make way for several new homes. Luckily, through the efforts of a group of concerned area residents, the Stirn Mansion was protected from demolition through a New York City Landmarks Preservation designation in January 2001. However, at that point, the Gross estate had been subdivided into two lots (79 Howard Avenue and 77 Howard Avenue). The lot rear to the mansion was not part of the landmark designation, and permission was granted for three homes to be built at 77 Howard Avenue. If that had occurred, the spectacular view from the mansion would have been severely obstructed.

The fate of the Stirn Mansion and its surrounding grounds to become just another Staten Island site for numerous mega-mansions turned in December 2008. Luciano Rammairone and Gina Biancardi purchased both the 79 Howard Avenue and 77 Howard Avenue lots, with the intention of converting the sprawling estate to an Italian Arts and Cultural Campus.

In 2009, “The Stirn Mansion” was renamed “Casa Belvedere” to reflect its breathtaking view (House with a Beautiful View). In 2010, the mansion portion of the estate, aka Casa Belvedere, was donated to the Italian Cultural Foundation, a newly formed not-for-profit arts and cultural organization. And so this historically significant, privately owned home began its transformational journey to a public institution.

Almost immediately upon acquiring its gifted headquarters, the Italian Cultural Foundation at Casa Belvedere began offering a myriad of exceptional educational programs in the building: Language and cooking classes; art and photo exhibits; film screenings; musical and theatrical performances; car shows and fashion shows; book signings, lectures, presentations and more. However, it was quite a challenge to run a cultural center in an over 100-year-old building that had fallen into major disrepair and was in desperate need of rehabilitation.

That said, an integral part of the foundation’s mission became to preserve and restore the Stirn House turned Casa Belvedere. This multi-million-dollar, multi-phased and herculean restoration project continues through today. The foundation is now working to create programs that will benefit surrounding neighborhoods in Staten Island. One project involves Nonno’s Garden at Casa Belvedere, with the goal to help nearby low-income residents not only benefit from the garden’s fresh produce, but also learn how to create their own gardens as a food source.

If you stop in front of Casa Belvedere to gaze at this beautiful survivor of a by-gone era, or if you sit on the back terrace mesmerized by the spectacular view, you understand why this incredible home and its history is worth saving, and appreciate its new vision and mission.

By admin|April 16th, 2021|History|Comments Off on From private home to cultural center: Transforming a 1908 NYC landmark into a public institution