Easter in Italy is a fervently celebrated Catholic holiday, commemorated on a much grander scale compared to other parts of the world. It’s a holiday marked with striking rituals and traditions, from the Holy Week observance of solemn processions and masses, to the Easter Vigil, to the celebration of the Easter Sunday Mass, said by the Pope at Saint Peter’s Basilica in Vatican City. Even the day after Easter is marked by Pasquetta, ‘Little Easter’, when family and friends venture out to the countryside to picnic with special homemade meals.

Some history behind the holiday

Many universal holiday traditions are rooted in Italy. From Christmas celebrations in Africa, to the practice of Lent in the United States, a great many Christian holiday practices derive from Italian culture. And Easter is no different, with some customs dating back to the Roman Empire.

To start things off we have Carnevale. Depending on where you live in Italy, this party could last anywhere from a few weeks to a full month or more, and consists of masks, parades, and indulgences, all leading up to Martedì Grasso, better known in America as Fat Tuesday, or Mardi Gras, the day before Ash Wednesday.

Since Easter Sunday marks the end of the sacrifice and reserve practiced during the Lenten season, an abundance of food plays a big part in celebrating the Resurrection. Traditional holiday delicacies across Italy include lamb, or goat, artichokes, and a variety of special sweet or savory Easter breads and pies, whose tastes and shapes vary from region to region.

A cousin to the Christmas panettone, the colomba is a fluffy bread shaped like a dove (hence the name), studded with candied orange peel and topped with pearl sugar and almonds.  Although originating in Milano, the sweet cake is enjoyed throughout many regions in Italy. 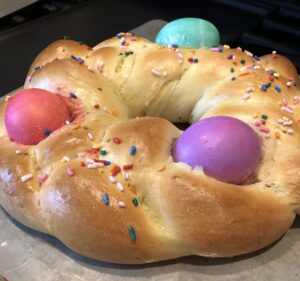 Pane di Pasqua is a bread decorated with colored eggs. The pastiera Napoletana (also known as pastiera di grano ) is a rich, sweet pie filled with ricotta, eggs, and whole, cooked grain. The dessert originated in Napoli but is widely enjoyed throughout Italy during Easter. Another favorite Easter pie is the savory  pizza rustica, made with bread dough and filled with beaten eggs and cured sausage, or salumi. Then there’s the traditional and easy-to-make macaroni pie, made with eggs, pasta and lots of cheese, which is also very popular at Easter time. 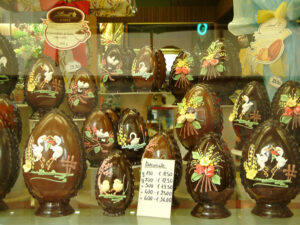 Another sweet Easter tradition is chocolate eggs. As is true in many other cultures, eggs are a symbol of fertility and new life. During Easter, artisanal Italian confectioners carefully craft elaborate hollow chocolate eggs, filling them with small toys and surprises. To learn more, click here. 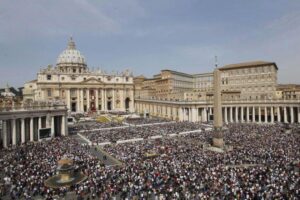 Easter Mass at the Vatican on Sunday morning traditionally sees one of the largest celebrations of Easter in the world. St. Peter’s Square can hold as many as 80,000 people!  Tens of thousands fill the square to hear Sunday morning Mass held by the Pope. Free tickets for this holy spectacle usually run out months in advance.

Pasquetta, Easter Monday: To top off the Easter season, Italians celebrate the Monday after Easter as Pasquetta, or “Little Easter,” a national holiday typically celebrated by having picnics in locales just outside the city. Some cities hold dances, free concerts, or unusual games, often involving eggs. In the Umbrian hill town of Panicale, cheese is the star. Ruzzolone is played by rolling huge wheels of cheese, weighing about four kilos each, around the village walls. The object is to get your cheese around the course using the fewest number of strokes. Following the cheese contest, there is a band in the piazza … and wine, of course.

By admin|March 25th, 2021|Food, Holidays, Traditions, Travel|Comments Off on Celebrating Easter in Italy