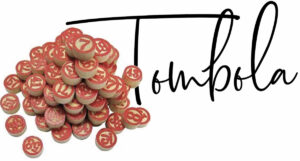 Tombola is a game that originated in Southern Italy. Similar to bingo, the game is fun to play, easy to learn, and appropriate for all ages. The game begins when the person holding the cartellone (big board) takes numbers out of the sack one at a time, calling them loudly, placing them on their box in the cartellone, and leaving time for players to mark the number on their card/s.

In order to win, players must have one of the following:

AMBO – 2 numbers on the same row

TERNO – 3 numbers on the same row

QUATERNA – 4 numbers on the same row

CINQUINA – 5 numbers on the same row

TOMBOLA – all numbers on the card

Each game ends when all 90 numbers are drawn or when a Tombola winner is declared, whichever comes first.

Members: FREE
Non-Members: $10 per person
Tombola cards : $3 each. Cards must be purchased for each round.

By Sue Vidal|November 22nd, 2021|Comments Off on Tombola