THIS WAS TOSCANINI: The Maestro, My Father, and Me 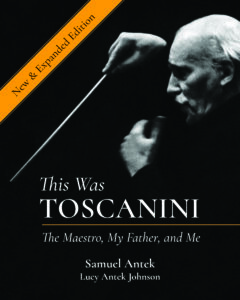 Celebrating all father figures in June, the Italian Cultural Foundation at Casa Belvedere presents Author Lucy Antel Johnson and her book:
THIS WAS TOSCANINI: The Maestro, My Father, and Me
By Samuel Antek and Lucy Antek Johnson
In Person event on Tuesday, June 14, 7 pm

Samuel Antek, a first violinist with the acclaimed NBC Symphony Orchestra, captured for posterity what it was like to perform under the baton of the legendary Maestro Arturo Toscanini, widely considered the greatest conductor of the mid-20th century.

In his musical memoir, Antek takes readers behind the scenes during hundreds of rehearsals, concerts, tours and grueling recording sessions. He shares keen observations of Toscanini’s approach to music making, his unpredictable moods and passions, his relentless demands on himself and his musicians, and his unwavering dedication to faithfully interpreting composers’ works.

Johnson’s new essays highlight her father’s rise from first violinist to conductor and musical director of major American orchestras, while sharing her own reflection of what it was like to grow up with a gifted father and the impact Toscanini had on their family and her father’s career.

Johnson will sign books brought to the event; the book will also be available for sale at the event.

By Sue Vidal|May 26th, 2022|Comments Off on THIS WAS TOSCANINI: The Maestro, My Father, and Me