Series: “If you are not indifferent…” PART 1 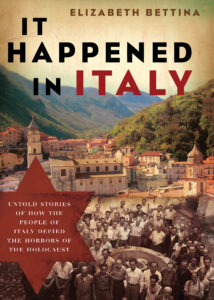 Part 1. Celebrating National Holocaust day with:
Book Presentation “It Happened in Italy, Untold Stories of How the People of Italy Defied the Horrors of the Holocaust". With Elizabeth Bettina
Imagine Elizabeth Bettina's surprise when she discovered that her grandmother’s village had a secret: over a half century ago, many of Campagna’s residents defied the Nazis and risked their lives to shelter and save hundreds of Jews during the Holocaust. What followed her discovery became an adventure as she uncovered fascinating untold stories of Jews in Italy during World War II and the many Italians who risked everything to save them. It is a work that brings to light the little-known history of how approximately 80% of Jews in Italy were saved during the Holocaust.
Her book was the inspiration for the documentary, My Italian Secret: The Forgotten Heroes, which was co-produced by Ms. Bettina and narrated by Golden Globe winning actress, Isabella Rossellini. The documentary was financed by a group led by Joseph Perella. The documentary opened in the Rome Film Festival and the Hamptons International Film Festival, October 2014. Ms. Bettina has had private audiences with both Pope Benedict XVI and Pope Francis and her work has also been recognized by the Simon Wiesenthal Center.
By Sue Vidal|December 17th, 2020|Comments Off on Series: “If you are not indifferent…” PART 1