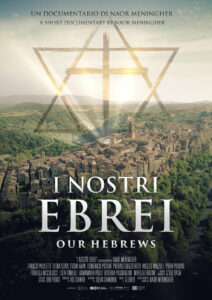 Screening of “Our Hebrews” and Q&A session live from Tel Aviv with the director Naor Meningher.

Proof of vaccination is required for all guests.

‘Little Jerusalem’, that is how the locals refer to the town of Pitigliano in southern Tuscany, because of its striking resemblance to Israel’s ancient city. Through the medieval stone walls, the fascinating story of 400 years of harmonic co-existence between Jews and Christians is told for the first time, leading to the heroic acts done by the locals during the time of the Holocaust.

Naor Meningher is an award-winning filmmaker and content creator. He graduated from Steve Tisch Film School at Tel Aviv University in 2016, and his short films “The Rat’s Dilemma”,  “An Old Score” and “Our Hebrews” were screened in dozens of festivals and won several awards.

Naor is the co-host of the Two Nice Jewish Boys Podcast and the creator of the Italy Guy vlog on Youtube.