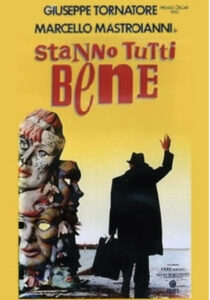 Stanno Tutti Bene – Everything is Fine (1990) by Giuseppe Tornatore

Matteo Scuro, a retired Sicilian bureaucrat and opera buff, has been stood up by his five adult children during the summer vacation, all of whom live in various cities on the Italian mainland with what he believes are responsible jobs. His children are named after popular opera characters: Tosca for Puccini's Tosca, Canio for Leoncavallo's Pagliacci, Norma for Bellini's Norma, Guglielmo for Rossini's Guglielmo Tell, and Alvaro for Verdi's La forza del destino. Despite their not visiting and the neighbors’ criticisms, he remains optimistic, considering that his children could not come because they are too busy. He decides to surprise each of them with a visit, traveling by train, and finds none of them as he imagined, with each of his children seeming to reflect the opera character after whom they were named.