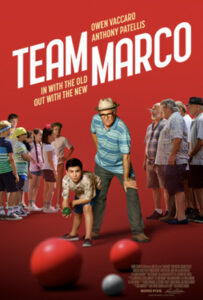 Tuesday, July 13 at 8 pm – Watch the movie and meet the director!

Filmed entirely on Staten Island, including Casa Belvedere, Team Marco is the debut feature film from Boro Five, founded by writer/director Julio Vincent Gambuto, who grew up in Rossville on the South Shore.

Young Marco is obsessed with playing video games and hardly leaves the house. But when his grandfather moves in, Marco’s life is turned upside-down, and he’s forced to go play outside. Nonno introduces him to bocce - the world’s oldest game - and to the neighborhood crew of old-school seniors who play daily at the local court. With sport, laughter and love, Marco finds connection to other people “in real life” and rounds up a team of neighborhood kids to take on his grandfather and his pals. Appropriate for ages 9 to 99. Click here to watch the movie trailer.