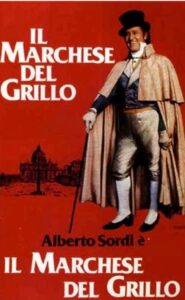 This Summer's Theme: Celebrating 100 years of Alberto Sordi, the famous Italian actor who depicted Italy's virtues and vices in more than 160 movies and contributed to making Italian comedy famous worldwide.

The film depicts early nineteenth-century episodes in the life of a nobleman in Rome. Loosely based on folkloric accounts of the real Onofrio del Grillo (who lived in the eighteenth century), this character plays a number of pranks, one even involving Pope Pius VII.