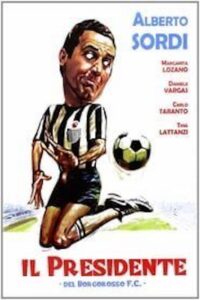 This Summer's Theme: Celebrating 100 years of Alberto Sordi, the famous Italian actor who depicted Italy's virtues and vices in more than 160 movies and contributed to making Italian comedy famous worldwide.

Hilarious comedy on the world of football fans. In 1970 the football sports industry was nothing new, but a comedy/comical film about it definitely was. Albero Sordi plays the part of Benito Fornaciari, a pale, religiously devout Catholic Upper Middle-class Italian, who inherits from a long-lost uncle a minor league football club. He decides to visit the club so as to sell it. But the local population has other ideas and gradually his initial reservations about football slowly erode away to be replaced by an almost fanatical devotion to "his" football club, to the point that he abandons his family, friends and hometown.