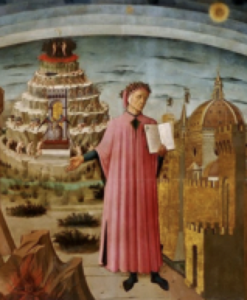 Celebrating Dante Alighieri: The man, the era he lived in, and his impact on Western civilization

Homer, Dante and Shakespeare are considered giants of world literature. Of all three, however, Dante’s Divine Comedy is considered one of the greatest literary masterpieces of all time.

In this lecture, Professor Louis Leonini will defend this critique as he takes you back in time to explore Dante Alighieri (1265-1321), his romantic poetry, his study of Italian dialects (De Vulgari), and Florentine Italian – which later became what is now called Standard Italian.

We can often judge a man and his work by his admirers. The professor will tell how Boccaccio and Michelangelo idolized Dante, and Petrarch, Chaucer, Milton, and Shelley were strongly influenced by him. Botticelli made drawings for the Divine Comedy, and William Blake (a 19th century English romantic poet) actually learned Italian so he could read Dante’s great work in the original.

This lecture will examine what motivated Dante’s great work, how it was written, and its impact even today, 700 years after his death.

By Sue Vidal|September 14th, 2021|Comments Off on Celebrating Dante Alighieri