Before There Was Venice… 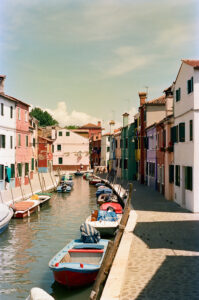 BEFORE THERE WAS VENICE...
With Anita Sanseverino and Louis Leonini.

Although the city of Venice is the most well-known part of the Veneto, there are islands, towns and cities that are far older,with a history all their own. In this presentation  Louis and Anita will explore the histories of great cities such as Verona, Padova, Treviso, smaller but equally important cities to the development of the region such as Aquileia, and Adria.

Join Anita Sanseverino and Louis Leonini as they discuss the places close to Venice, such as Torcello, the place that is considered the birthplace of Venice itself, the island of Burano, a fishing village of brilliantly colored houses, painted so that the returning fishermen could see their houses through the fog.

During the presentation Anita will share her photographs of the various areas being discussed.

By Sue Vidal|October 8th, 2020|Comments Off on Before There Was Venice…